Touro Law Center’s student team made it through the elimination rounds to the “round of 16” and finished tied for ninth in the prestigious 16th annual Willem C. Vis International Arbitration Moot in Vienna, Austria. The competition included teams from 233 law schools from 59 countries around the world. Congratulations to Touro students Sardar Asadullah, Han Sheng Beh, Benjamin Noren and James Lucarello, who received an individual award recognizing him as one of the best in the world for his oral argument. 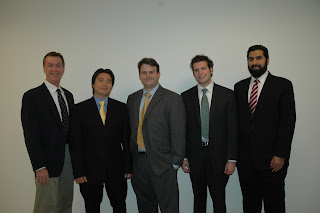 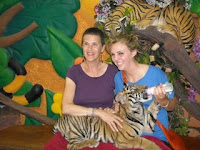 Associate Dean Louise Harmon is on sabbatical this spring. She is sailing around the world teaching Asian Philosophy, Biomedical Ethics and Immigration History on the University of Virginia's Semester at Sea program, while also "home" schooling her daughter Jo, who joined her on the trip. They began in Bermuda, then traveled to Cadiz, Morocco, Namibia, South Africa, Chennai, Bangkok and Vietnam. Their journey continues on to Hong Kong, Shanghai, Kobe, Yokohama, Hawaii, Guatemala then back through the Panama Canal before returning home.

She invites you to read her travel blog at harmoneyes.blogspot.com.

Email ThisBlogThis!Share to TwitterShare to FacebookShare to Pinterest
Labels: Other

Touro Law Center’s Bruce K. Gould Book Award will be presented to Bob Woodward for his book The War Within: A Secret White House History 2006-2008 on Tuesday, April 21, 2009 at 6 p.m. at the Law Center in Central Islip, NY. The presentation will be followed by a book signing and general reception at 7 p.m. 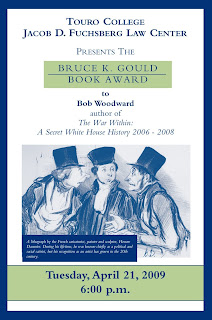 The Bruce K. Gould Book Award, which honors the best work of fiction or non-fiction of the past year on a law-related subject, is named for its benefactor, Bruce K. Gould. Mr. Gould was a principal in Gould Publications Inc., a family-owned publishing company in Florida, specializing in law books and treatises for the legal and law enforcement communities. The business was started in 1953 by Mr. Gould’s father and mother and over the years has grown to be one of the leading statutory law book publishers in the country until the publishing assets were acquired in December 2004. He is an alumnus of Touro, class of 1984, and he received a Masters of Legal Letters from NYU School of Law in 1993. Mr. Gould is a founding member and the second president of the Touro Law Center Alumni Association and an active member of the Law Center’s Board of Governors. In 1994, he endowed the Law Center’s first faculty chair, and was the Law Center’s Capital Campaign chairman.

Our 2009 Gould Award recipient, Bob Woodward, has worked for The Washington Post since 1971. He has won nearly every major American journalism award. The Pulitzer Prize was given to the Post in 1973 for the reporting of Woodward and Carl Bernstein on the Watergate scandal. In addition, Woodward was the main reporter for the Post’s articles that won the National Affairs Pulitzer Prize in 2002. The Weekly Standard called Woodward “the best pure reporter of his generation, perhaps ever.” In 2003, Albert Hunt of The Wall Street Journal called Woodward “the most celebrated journalist of our age.” In 2004, Bob Schieffer of CBS News said, “Woodward has established himself as the best reporter of our time. He may be the best reporter of all time.” Woodward has co-authored or authored eleven #1 national best-selling non-fiction books – more than any contemporary American writer. His most recent book, The War Within: A Secret White House History 2006-2008, was released on September 8, 2008 and became a #2 national best-seller. 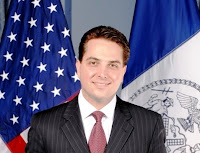 Touro Law Center's Office of Development, Alumni Relations and Communications is proud to announce that Matthew Daus ’92 has been selected as our April Alum of the Month. Mr. Daus was an active member of the Touro community while attending law school and remains engaged through Touro Law Center’s Mentor Program and special event committees; as well as attending various alumni and student events throughout the years.

Please click here to read Matt’s full biography. On behalf of the entire law school community, we extend our congratulations to Matthew Daus.