The Board of Trustees of Touro College and Touro University today announced the appointment of Alan Kadish, M.D. as president and chief executive officer, and Rabbi Doniel Lander, son of Touro founder Rabbi Dr. Bernard Lander, to the position of chancellor. Plans for formal convocation ceremonies will be announced soon.
In succeeding Dr. Lander, Dr. Kadish becomes only the second president in Touro’s history. Dr. Lander founded Touro 40 years ago and led the institution through tremendous growth until his recent passing.

As chancellor, Rabbi Lander’s role will be to perpetuate and preserve the legacy of his father. Presently, Rabbi Lander is dean of the Institute for Advanced Talmudic Studies at Yeshivas Ohr Hachaim, in Queens, a position he will continue to hold.

“We are proud to name Dr. Alan Kadish to succeed Dr. Lander as president and CEO of Touro College, and Rabbi Lander to the post of chancellor,” said Dr. Mark Hasten, chairman of the Board of Trustees, in making the announcement. “In the spirit of our beloved and respected founder, Rabbi Dr. Bernard Lander, we wish to ensure the continuity and well-being of future generations at Touro. They will provide strong leadership as Touro College moves forward into this new phase of our development with confidence and vigor.”

Touro is the largest Jewish-sponsored educational institution in the United States. Founded in 1970 as a small men’s college, Touro has expanded broadly since its inception and today educates approximately 17,500 students at 29 schools and colleges in several states and overseas. A pioneer in Jewish education, The Touro system is engaged locally, nationally and worldwide in promoting academic excellence, egalitarian values, tolerance and the well-being of others through quality educational programs and community engagement.

“Since he joined Touro last year as senior provost and COO, I have been fortunate to have worked closely with Dr. Kadish, and I have the utmost confidence in his leadership abilities, which are extraordinary,” said Rabbi Lander. “I am deeply grateful that he has embraced the opportunity to apply his energy and enthusiasm to help lead Touro into the next century.”

Said Dr. Kadish: “I am honored to be appointed president and CEO of Touro College by the Board of Trustees, and to have the opportunity to follow in the footsteps of a great leader. I look forward to pursuing Touro’s important mission, and to continuing our tradition of providing quality education to secular and Jewish students across the globe.”

Dr. Kadish stressed the importance of working to help ensure that all students enter the workforce prepared to meet the challenges of an increasingly competitive economic climate armed with the skills and resources provided by a Touro education. He also noted that Touro has become an important school for the study of health sciences and said he looks forward to moving Touro’s geographically distinct medical programs into leadership roles in American medicine.

Dr. Kadish joined Touro from Northwestern University in September 2009, as senior provost and chief operating officer. At Northwestern University, he was a prominent cardiologist on the national stage, and served on the faculty and as an administrator for the previous 19 years. He has worked as a teacher, research scholar and scientist, and clinician. He held numerous senior-level administrative positions at Northwestern, and also at the University of Michigan, where he had various appointments prior to joining Northwestern. A prolific researcher and writer, he has written extensively in his field, authoring over 300 peer-reviewed papers and contributing to several textbooks.

He received his M.D. degree from the Albert Einstein College of Medicine at Yeshiva University and his postdoctoral medical training at the Brigham and Women’s Hospital, an affiliate of Harvard Medical School, and at the Hospital of the University of Pennsylvania, where he was a fellow in cardiology. He is board certified in internal medicine, cardiovascular disease and cardiac electrophysiology. 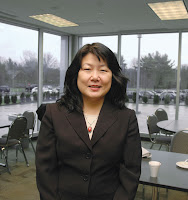 Touro Law Center's Office of Development, Alumni Relations and Communications is proud to announce that the Honorable Margaret Chan ’93 has been selected as the alum of the month for March. Margaret Chan is currently a Judge at the Civil Court of New York. She is one of a handful of Asian judges in the State of New York. In Manhattan, there are, to date, two Asian judges of Chinese descent in the Civil Court and one in the Supreme Court.

In Civil Court, she adjudicates cases under the monetary amount of $25,000. The Civil Court also gets cases above the jurisdictional amount that are transferred from Supreme Court. The cases before Judge Chan range from breach of contract to no-fault insurance to negligence actions to commercial landlord and tenant disputes and consumer debt cases.

She is among the first Asian American graduates of Touro Law School, the first Chinese American Managing Editor of the Touro Law Review and one of a select few Senior Court Attorneys at the NYS Appellate Division. She received her B.A. from Brooklyn College and her J.D. from Touro Law School in 1993. While attending Touro Law, Judge Chan published a note in the Touro Law Review, was a Teaching Assistant for the Legal Education Access Program (LEAP), a research assistant, involved in the Public Interest Law Organization of Touro (PILOT) and participated in pro-bono work helping Haitian refugees in Miami. She is admitted to the New York State Bar. She previously was an associate, and later, a partner at Gim & Chan, PC before going solo. Prior to her work in the private sector, she was a New York State Supreme Court, Appellate Division, Second Department - Senior Court Attorney.

Email ThisBlogThis!Share to TwitterShare to FacebookShare to Pinterest
Labels: Alumni of the Month

Touro Law Center's Criminal Law Society is sponsoring what promises to be a very unusual program on the death penalty. It will take place on Wednesday, March 17th, at 6:30 p.m. at law school in Central Islip, N.Y.

At 6:30 p.m., they will screen the award-winning documentary "ROBERT BLECKER WANTS ME DEAD." This film -- which is riveting and disturbing at the same time -- is about the relationship between New York Law School Professor Robert Blecker, a very thoughtful advocate of the death penalty, and a death row inmate in Tennessee who murdered his four children. The film is an extremely powerful statement of both sides of the issue.

At the end of the documentary, Prof. Blecker will speak -- and defend his position. His talk is entitled, "WHO SHOULD DIE, AND WHY." Ample audience discussion and Q & A will follow.

This will be a very memorable evening. All law professors, law students, lawyers, judges and members of the public are invited. Admission is free. For further information, contact gregory-esposito@tourolaw.edu.

On March 25, The Public Relations and Marketing Group (PRMG)’s president and founder, John Zaher, an attorney and Touro Law alum from the class of 1998, will present a CLE lecture, “PR and Marketing for Lawyers,” at Four Seasons Caterers, located at 15 Prospect Street in Southampton. The lecture is from 12:30 to 3:15 p.m. and is being presented by the Suffolk Academy of Law, an accredited provider of New York mandatory continuing legal education. Registration is $65.00 for Suffolk County Bar Association members; $75.00 for non-members. Attorneys will receive two Continuing Legal Education (CLE) credits for ethics and professionalism for this program. The course is appropriate for both newly admitted and experienced attorneys.

This program will provide attorneys with strategies to grow their practice while conforming to ethical requirements. In addition, those in attendance will gain practical tips for choosing marketing methods that are suited to their practice, personality and their means.

Registration and light lunch will begin at noon. Those who wish to pay at the door will be charged an additional $10.00. To register, contact the Suffolk Academy of Law at (631) 234-5588.

There is so much that the Nassau County Bar Association has to offer you. To that end, we would like to have you join us, as our guest, at an Orientation and Cocktail Party on Monday, March 15, 2010 at 5:15 p.m. so that you can have a tour of Domus, our beautiful, 75-year-old home of the Association, and to learn about the benefits of belonging to this organization. In addition, you will be introduced to some members of our Executive Committee, Board of Directors, and Association Membership committee. Several of our more than 20 staff members will be available to answer your questions, and Quartz Caterers, our on-site dining establishment, will be providing hors d’oeuvres.

In addition, if you choose, you can participate in “Walk Through Supreme Court,” an informative program that will introduce you to court procedures, as well as the judges and staff of the courts. The program begins at 3:30 in the Central Jury Room and ends at our doorstep at 5:15. There is no charge for either program, but reservations are required for both.

We hope to see you on the 15th. Please contact a member of our Special Events staff at 516-747-4070 or events@nassaubar.org to RSVP. Reservations are required, but again, there is no charge for these events.

There will be an Accepted Student Reception held at Touro Law Center on Wednesday, March 17 from 6:30 p.m. – 8:00 p.m. Volunteer alumni are needed to meet with prospective students. Students are seated at tables with alum and faculty based upon your area(s) of practice and student interest. Dinner will be served. If you are able to attend the accepted student reception, please email kmatthews@tourolaw.edu or call (631) 761-7063.


On Wednesday, March 10, 2010 the Touro Law Center Alternative Dispute Resolution Society will hold the preliminary round of the intra school Negotiation Competition from 5:15 p.m. – 7:00 p.m.

In the competition, two–person student teams, each representing a different party, will attempt to negotiate a resolution of a hypothetical dispute. The students’ performances will be judged on criteria used in the American Bar Association (ABA) student negotiation competitions. The top four teams from the preliminary round will compete in the final round on Thursday, March 11 from 5:00 p.m. – 8:00 p.m. at the Law School. The top two teams from the final round will represent Touro Law at the ABA Regional Negotiation Competition in the fall of 2010, which will be held at Touro Law Center.

If you are interested in volunteering as a judge for the Negotiation Competition, please email kmatthews@tourolaw.edu with your name, class year, phone number and the date your are available to participate; or you may call (631) 761-7063.