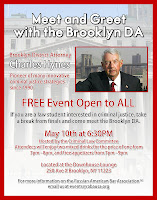 The Russian American Bar Association Criminal Law Committee is pleased to host a Meet and Greet with the Brooklyn District Attorney, Charles Hynes, pioneer of many innovative criminal justice strategies since 1990. The event will be held on Thursday, May 10th starting at 6:30 p.m. and will be held at the Downhouse Lounge, 250 Ave X, Brooklyn, NY 11223. Attendees will enjoy free appetizers (7 to 9 p.m.) and will enjoy two mixed drinks for the price of one (from 7 to 8 p.m.) For questions or additional information, please e-mail events@rabausa.org.
at 10:52 AM No comments:

Touro Law Center is pleased to host an Alumni-Student Networking event on Thursday, April 19th, starting at 6 p.m. at the Law Center. This program is co-sponsored by the Student Bar Association, and the Alumni and Career Services Office. Alumni are invited to attend to meet with current Touro Law Center students. The event has been designed to be quick, fund and informative. Hope you are able to join us. RSVP to alumni@tourolaw.edu or call (631) 761-7063 for additional information.

Touro Law Center's Office of Development, Alumni Relations and Communications is proud to announce that Greg Rinckey ’98 has been selected as the alum of the month for April 2012. Mr. Rinckey is a leader in his profession, is very committed to his clients and the community, was a member of Moot Court while in law school and remains engaged with the law center through the Alumni-Student Mentor Program.

Greg Rinckey is managing partner at Tully Rinckey PLLC., a full-service law firm with 30 plus attorneys and more than $7 million dollars in revenue in 2011. The firm is headquartered in Albany, and has offices in Washington D.C and Arlington, Va. In 2011, Greg guided the company as it achieved its highest INC 5000 ranking, coming in at No. 906 on the list of America’s 5,000 fastest growing companies. Under Greg’s watch, the firm’s expansion in 2011 led to the hiring of a former federal presidential appointee and a former New York congressman. He also celebrated another attorney’s achievement in receiving the highest rating by Martindale-Hubbell, a peer review-rated list of nationally recognized attorneys. In 2012, Tully Rinckey PLLC, under Greg’s leadership, will open its fourth office - it’s second in New York State - in Syracuse. In addition to running the firm’s day to day operations, Greg has and continues to win many landmark cases in the fields of military and employment law. Greg’s landmark cases include Garcia v Dept of State, Savage v Savage and Weiberg v Dept. of Justice.

To view his full bio, please visit www.tourolaw.edu/alumniofthemonth
at 11:15 AM No comments:

Email ThisBlogThis!Share to TwitterShare to FacebookShare to Pinterest
Labels: Alumni of the Month

This is a true story involving a dozen recent law school graduates from Touro College Jacob D. Fuchsberg Law Center of Huntington, New York in 1988. Anyone who has prepared for the bar exam well knows the enormous amount of studying and effort involved to pass a bar examination, and notwithstanding same the high degree of failures. It even took John F. Kennedy, Jr. three (3) times to pass the New York State Bar Exam and even the famous line from the movie, My Cousin Vinny “six times a charm” for Vincent Gambimi to pass the Bar shows how hard it really is.
Having been well prepared after three (3) years of law school, completing bar exam preparation courses with Bar-Bri, John Pieper, Marino and others about a dozen friends, including yours truly thought of everything possible to maximize the chances of passing the bar exam and to avoid the obstacles and foresable problems such as delays or strikes with the Long Island Railroad and access to the Jacob Javits Center located in New York City. We therefore planned to reserve rooms at nearby hotels such as the Milford Plaza Hotel in Times Square the day before the examination. We further agreed that none of us should discuss the bar exam any further since it would only lead to unnecessary anxiety and not change the results. So off we went for a nice dinner at the Hard Rock Café and while walking back to our hotel it was decided that we would go to Saint Patrick’s Cathedral for prayer. Upon reaching Saint Patrick’s Roman Catholic Church only one person in our group of about twelve (12) persons from various faiths and ethnic backgrounds refused to enter the church and remained outside while the rest of us went inside to pray.
At that time in 1988 the New York State Bar Exam based upon local laws was among the most difficult in the country to pass and nearly forty percent (40%) of first time test takers failed with higher failure rates among second time or further repeat test takers. Likewise, the first time passing rate for our law school was then only about fifty-five percent (55%). In other words, according to the statistics about half of our group of recent law school graduates should have failed the 1988 New York State Bar Exam, however, all of us but for that one person who refused to enter the church, passed the New York State Bar Exam upon the first taking! That was a small miracle indeed.
There are a few more tips to share about taking the bar examination. The Javits Center in Manhattan is filled with about 7,000 people taking the test at the same time and it was impossible to get lunch during the break. Therefore, the well prepared lawyer-to-be should bring lunch and water, which must all be in clear containers to rule out cheat sheets. The next tip of bringing construction type ear plugs may sound odd at first, however, distractions must be avoided at all costs due to the extreme time pressure during the bar exam as there are no time extensions for any reason. Here are a few other real occurrences during my 1988 examination that made the ear plugs worth while. One of the folding tables behind me collapsed in the middle of the exam, which was quite startling to those around us and a loud noise like a gun shot echoed through the cavernous basement of the Javits Center. Another woman at the table next to me vomited during the exam and on the second day the woman sharing my table, after cursing and pounding her fists, stormed out without completing the examination in frustration. Rather then be upset with those nuisances surrounding me, I was trained to be like a ninja well focused on my task and to ignore everything else around me. The experience was most unpleasant as my own folding table was filthy and the metal edge was twisted and sharp and in fact was cutting my forearm during the exam that is clearly designed as a huge obstacle and process of elimination. The continued exam on the third day in New Jersey was a pleasure in comparison and the test takers were afforded better accommodations with cloth covered tables and ice water.
So therefore the lesson to be learned and shared with our successors is not only to study hard and best prepare for one of the most trying and important tasks in a professional’s life, but to thank God and pray for good results.
Should the reader be wondering what ever happened to this group of twelve law graduates from Touro Law School, while I don’t think it proper to furnish their names, it is fair to say that most are solo practitioners with their own successful law firms or partners in small firms located throughout Long Island and New York City, one fellow left the practice of law some ten years later to engage in other private enterprises of real estate development, another fellow took a position in a national healthcare firm, one lady works for the New York State Court System and the other lady that failed the New York State Bar Exam remains employed by the same large corporation in a job that she loves and never practiced law.
at 11:35 AM No comments: