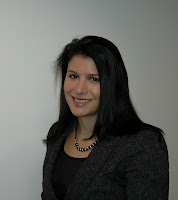 Touro Law Center's Office of Development, Alumni Relations and Communications is proud to announce that Jacquelyn O’Neil has been selected as the alum of the month for January 2012. Ms.O’Neil is a leader in her profession, was an active member of the Touro Law community while attending law school, and remains engaged with the law center through judging competitions. Her accomplished career is highlighted in the bio below. On behalf of the entire law school community, we extend our congratulations to Jacquelyn O’Neil.

Jacquelyn O’Neil, Esq. currently serves as a Law Clerk for the Honorable Joseph Bianco, United States District Court for the Eastern District of New York. She was previously an associate in the Commercial Litigation department at Moritt Hock & Hamroff LLP. Ms. O’Neil received her Bachelor of Arts, cum laude, from Loyola College and her Juris Doctor from Touro Law Center, where she graduated summa cum laude, in May 2010. Upon graduation Ms. O'Neil received the award for Exemplary Contributions to the Quality of Student Life. During law school, she was a member of the Moot Court Honor Society where she placed first in the Annual Bainbridge Moot Court Competition and served as the Research Editor during the 2009-2010 academic year. Ms. O’Neil was also a member of the Women's Bar Association and the Real Estate Law Society. During the 2008-2009 academic year she served as the Vice President of the Real Estate Law Society. In addition, Ms. O’Neil interned for the Honorable Kenneth A. Davis of the Nassau County Supreme Court and the New York State Office of the Attorney General. She is admitted to practice in New York State, the United States District Court for the Eastern District of New York and the United States District Court for the Southern District of New York. She remains active with the Touro Law Center community through judging Moot Court competitions and helping to mentor students.
at 1:00 PM No comments: